a fusion of history and structural elegance

When you visit Bangkok you cannot miss the Democracy Monument which is at the intersection of Dinso Road and the Ratchadamnoen Klang Road of the capital city. The structure was erected in 1939 in commemoration of the 1932 Siamese Coup d’état. The coup led to the establishment of a constitutional monarchy in the former Kingdom of Siam, which was led by the military leader Phibun. Phibun imagined Bangkok as a new westernised capital and a democratic nation representing the will of the Thai people; it represents this new era in Bangkok. The design and structural elements of this masterpiece signify the many aspects of Phibun’s political outlook. The four wing structures are protecting a carved palm leaf manuscript which is the constitution of 1932. The wings represent the Thai forces, Army, Navy, Police and Air Force. Even the height of the wings are symbolic as they are 24 meters high and represent the day the coup took place which fell on the 24th of June.

The monument personifies the Thai people and the Thai forces as the advocates of democracy. The Coup was meant to be an exercise of the peoples will. It was carried out by forces as a united front on behalf of the Thai people. The forces are figures of justice who are said to have brought freedom for the nation. As a result Thailand’s first constitution was drafted and a box in the middle guarded by the wing pillars. In the years that followed 1932 several public demonstrations have been staged at the Democracy Monument. The student demonstrations of 1973 and the Military Coup of 1976 have used this location as a rallying point. 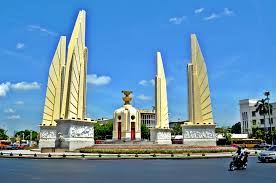 Since Thailand’s infamous traffic often blocks access to this memorial so it is easier to take a look at this place during night time. The fountains are lit up at night and the majesty of the structure can be observed carefully in the afterhours. For those visiting Thailand for the first time, a Bangkok hotel would be ideal from where it would be easy to make a trip to see the Democracy Monument. From the wide range of hotels Bangkok there are some great places that will provide comfortable rooms including luxurious facilities. One place that is worth checking out is Anantara Bangkok Sathorn which is in the heart of the city and close to most of the Thai attractions.